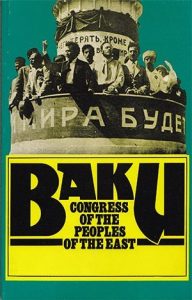 It was in early September 1920, that a historic conference took place in Baku, Azerbaijan.

The aim was to inspire a revolutionary consciousness among the people of former Tsarist Republics and beyond, many of whom were living in near medieval conditions in colonial or semi-colonial states.  A census of the gathering records the participation of a number of ethnic groups that ring unfamiliar to Western ears, such as Ingush, Ossetians, and Kalmyks. Ultimately, almost 1,900 delegates were to take part.

A focus of the conference was British Imperialism, and speakers frequently compared the brutality of the British in India to their long history of oppression in Ireland, which at that moment, was in rebellion. At the time, the British were attempting to reap the benefits of an Ottoman Empire in ruins, and took great pains to sabotage the conference, using ships to interdict those en route to it, and even bombing one vessel from the air, resulting in the death of two delegates.

The daily sessions were chaired by Russian revolutionary, G. Zinoviev, who stated, “We must at last slam shut this book of the accursed past, so that it may never return, and must open a new page of history, when the oppressed peoples of the East will no longer be slaves, when they will not allow British officers shamelessly to plunder the Indians and the Persians, killing, insulting and mocking at everyone”

Another historical figure who took part was American journalist, John Reed, author of the book, ‘Ten Days that Shook the World’. The conference is briefly portrayed in the Oscar Winning film of 1981, ‘REDS’.