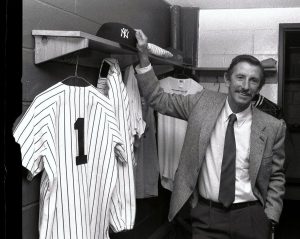 On 24 July, 1983, baseball fans were treated to an unusual spectacle when the Kansas City Royals faced the New York Yankees.

The Yankees manager was Billy Martin, famous for wearing Yankees number 1, and infamous for his hot temper and aggressive style of play and had the unique ability to turn any ordinary game into a hotbed of seething controversy.

Martin had noticed what he believed to be an unusual amount of pine tar on the bat that George Brett had used, and asked the umpires to inspect it. Confused commentators speculated as to what was a foot, as the officials commiserated in a huddle, and laid the bat down in comparison to home plate. The umpires agreed that the amount of pine tar present on the bat exceeded what was permissible under league play. Spying George Brett in the dugout, one of them pointed at him with the bat, and then gave the ‘you’re out’ signal with his thumb.

A furious Brett stormed out of the dugout in a rage, charging the officials with eyes bulging and face red. He had to be restrained as he shouted abuse at the officials. The video clip was run on every nightly newscast and became familiar to sports fans and everyone else.

As Brett was the third out in the ninth inning with the home team in the lead, the game ended with a Yankees win. One commentator wryly remarked that Brett had hit a “game losing home run”.

The win was short lived however. The Royals protested the ruling and the American League President ordered that a new game be played being picked up from the moment of George Brett at bat. When that game was played a month later, the Royals won.

The bat in question in now on display at the Baseball Hall of Fame.