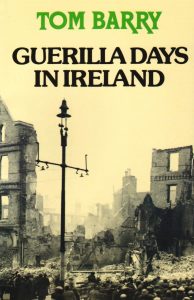 It was on this day in 1897 that one of the most famous names in the fight for Irish Independence was born, Tom Barry.

A veteran of service in the British Army in the First World War, Barry joined the fight for Irish Independence in July of 1920, and was considered by the Irish Republican Army to be very valuable since he had formal military training and combat experience.

Barry rarely commanded more than a few hundred men at any one time, but their skilled guerrilla tactics caused the British to dispatch over 10,000 men to wipe them out, but Barry’s men avoided detection and capture thanks to their knowledge and skillful use of the rugged terrain in and around County Cork.

In addition to his raids against the British occupiers, Barry’s men also gained a fearsome reputation for their ruthless campaign against those who informed and collaborated with the British.

Barry was so hated and feared by the British that when a truce was called in 1921 and peace negotiations began, the first demand by the Crown was to hand over Barry, something Irish negotiators refused to do.

In December of 1921, a treaty was agreed upon, but it left Ireland divided, with the 6 Counties of the North remaining part of the UK and separated from the 26 Counties of the South which would eventually become the Republic. This treaty and division resulted in a Civil War in which Barry played a prominent role on behalf of the Anti-Treaty forces. Barry resumed his guerrilla tactics in the County of Cork with some success against the new government, but dwindling numbers and internal schisms among the Anti-Treaty forces left his position increasingly desperate and he spent as much time avoiding capture as he did directing combat actions. His fighting days came to an end with a general amnesty granted in 1924. In the 1930’s Barry again was jailed and took part in activities of Armed Struggle carried out by the IRA.

In 1949, he published his memoirs, ‘Guerrilla Days in Ireland’, which would become popular not only among Irish Republicans, but also among those engaged in Armed Struggle around the world. It is available in campus libraries, whose collections University Staff can access via their WiscID card.