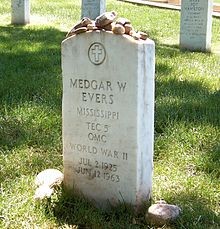 On 12 June, 1963, Civil Rights activist Medgar Evers was shot and killed in his driveway as he was entering his family home in Jackson, Mississippi.

Medgar Evers was a Mississippi native, born in 1925, with a distinguished US Army service record, that included participation in the Normandy Invasion of WWII.

He earned a BA from a historically black college in 1952 and began work for the Magnolia Life Insurance Company. In 1954, he was named Field Secretary for the NAACP. Evers quickly became a high profile activist and was subjected to various forms of terrorism, including an attempted firebombing of his home and being narrowly missed by a speeding car.

Even in death, Evers broke barriers. Upon being struck by a rifle bullet, his family rushed him to the nearest hospital, which refused to admit the black patient. Evers’ wife Myrlie eventually persuaded them to do so, making him the first African-American admitted to the white hospital, albeit, in vain.

The day of his funeral, Dr. Martin Luther King, Jr. led a procession of 5,000 citizens to honor the slain leader. Evers was buried in Arlington National Cemetery.

Myrlie Evers aggressively pursued the conviction of her husband’s killer, who would not be convicted until 1994, and would die in prison in 2001.

Folk singer Phil Ochs recorded a song about Evers and his assassination. It included the lines:

Too many martyrs and too many dead
Too many lies too many empty words were said
Too many times for too many angry men
Oh let it never be again.