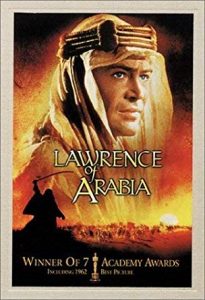 It was on 15 May, 1961, that principle photography on the motion picture ‘Lawrence of Arabia’ began.

Lawrence of Arabia was nominated for ten Oscars at the 35th Academy Awards in 1963; it won seven in total, and is the longest movie ever to win a Best Picture Oscar.

The film was loosely based on the life and career of British Army Intelligence Officer, T. E. Lawrence. During the First World War, Lawrence used his knowledge of the Arab peoples to unite tribes into irregular cavalry units and conduct guerrilla actions against Turkish forces which were allied with Britain’s German enemy. These unconventional military operations met with success, and made for good newspaper copy, making Lawrence famous in his own time.

In 1991, the film was deemed “culturally, historically, or aesthetically significant” by the Library of Congress and selected for preservation in the United States National Film Registry.

In 2012, the Motion Picture Editors Guild listed the film as the seventh best-edited film of all time based on a survey of its membership.