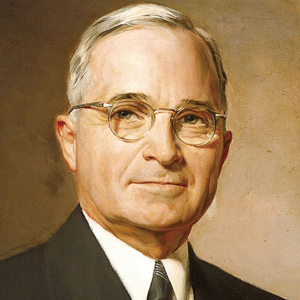 It was on 8 May, 1884 that Harry S Truman was born in Missouri. He would go on to become the 33rd President of the United States.

In preparations for Franklin Roosevelt’s fourth run for the Presidency, the more conservative elements of the Democratic Party found Vice President Henry Wallace unacceptable, and sought to replace him on the ticket. Their solution was the Senator from Missouri.

On 12 April, FDR died. Truman, by order of succession, automatically became the President, and remarked to the press, “If you ever had a load of hay fall on you, you know how I feel.”

Despite an Administration so beset by problems that a popular phrase of the day was, “to err is Truman!”, the President’s down to earth style and frank vernacular proved popular with voters, allowing him to be unexpectedly elected to a full term of his own in 1948.

In 1950 he would survive an Assassination attempt carried out by Puerto Rican Nationalists, during which a police officer was killed.

He chose not to seek a second full term in 1952, and instead influenced the Democratic Party to choose Illinois Governor Adlai Stevenson as the nominee.

After his Presidency, he and his wife took a road trip half way across the country, from their Missouri home to a convention in Philadelphia he had been invited to address. It was the last such time a former President would travel without a security detail.