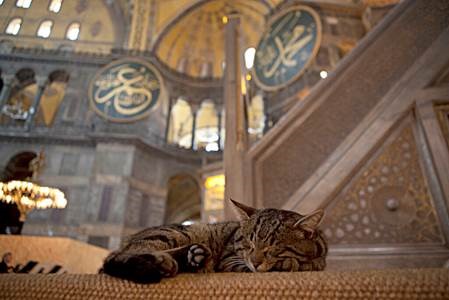 Today marks the start of Ramadan, a holy season for those who practice the Islamic faith. In the United States the population of Muslims is small and the increase in immigration from countries with a strong Muslim tradition is recent, therefore, many Americans do not know or understand the basic tenants of the Muslim faith that is practiced by their Co-Workers. It is for this reason that the Office of the Secretary has produced a flyer – “ Learning about Islam and it’s People“, which you can view on our home page if you click the ‘MEDIA’ tab and then proceed to the ‘CULTURE POSTERS’ option.

Most every religion expresses charity towards the creatures of the earth, but what might not be known to many is that in the Islamic tradition in particular, there are many favorable references to cats. It is not considered inappropriate, for instance, for a cat to enter a Mosque. It has been said that many early Islamic scholars enjoyed the company of cats because they caught mice which were a nuisance when it came to damaging their books. There are others stories in the Islamic tradition that cats seek out those who pray, including the Prophet Muhammad, who it is told, once found a cat napping on the sleeve of his robe and rather than disturb the cat, he cut off the sleeve so the cat could continue its slumber undisturbed.