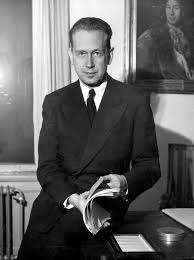 It was 10 April, 1953, that Dag Hammarskjold was sworn in as the 2nd Secretary General of the United Nations. A Swedish diplomat and economist, he spent his childhood in the Swedish city of Uppsala.

When he assumed the post at 47 years of age, the UN was still a relatively new organization. Hammarskjold sought to demonstrate his accessibility by personally going Department to Department and shaking hands with the employees, as well as joining them in the cafeteria for his meals.

Hammarskjold proved to be a hands-on and active Secretary. In 1955 he went to China to secure the release of 11 US pilots who had been taken prisoner during the Korean War. He became especially involved in the Congo Crisis, making 4 trips to Africa to settle the conflict there. His final trip was in September of 1961, he never reached his destination, his plane crashed in Rhodesia and all 16 aboard were killed. There was, and continues to be, wide speculation as to the cause of the crash. The United Nations itself said the cause could not be determined. Many believed that the plane was deliberately shot down.

Upon learning of his death, President John F. Kennedy remarked, “He’s a great man, I’m a little man compared to him”.

In 2011, the ‘Financial Times’ newspaper stated that Hammarskjold set the standard by which all other Secretaries would be judged.