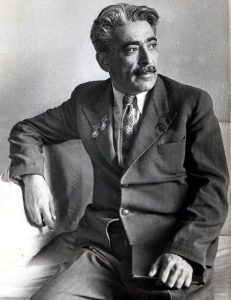 Samad Vurgun was born in 1906, and saw his first published poems in 1925, in the journal, ‘New Thought’. In 1929 he entered the Literature School at Moscow University.

A proud advocate of his Azerbaijan heritage, he translated such famous works as those of Pushkin into his native language, and was awarded a medal by the Pushkin Committee.

By 1941 he had been awarded his second state prize for his work.

During the Second World War he traveled to many front line locations, meeting the soldiers and taking part in military ceremonies. His poem, ‘Partisans of the Ukraine’, was considered so moving and powerful that it was printed on leaflets and dropped by air over the areas in which Partisan bands operated against the Nazis.

After the war he was elected as a full member of the Academy of Sciences of Azerbaijan.

He died in 1956, shortly after having been named ‘National Poet of Azerbaijan’.

O Life! At times it’s smirched with mire and dirt,
But see, life’s scene a thousand curtains knows.
When you, young man, in difficult times are hurt,
Then bless the manliness which in you grows.

O Timel It may be pitiless, or be sad,
And now and then it cruelly shakes the earth.
It Time intends to annihilate you, my lad,
Go boldly forward, and fight for all you’re worth.

O Boldness! Every moment it must imbue.
Without it life would perish, that’s my belief.
And you, who’ve come to know my words are true,
As a man, a son of man, control your grief.

Now what I wished to say I cry aloud:
Aspire to wide horizons, to highest skies!
Don’t think, young man, that life’s a rosy cloud,
And do not bend, no, not in any wise!