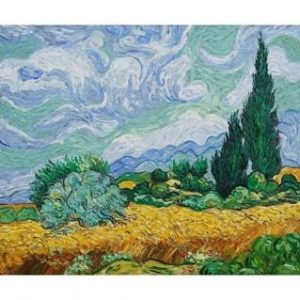 30 March marks the birthday of Vincent Van Gogh, in 1853. He is one of the world’s most recognized painters, although he was not successful in his own lifetime.

Van Gogh was born into a middle class family in the Southern Netherlands. In 1886 he moved to Paris, France, living in an apartment in the Montmartre neighborhood and painting portraits of friends and acquaintances. In two years in Paris he would produce more than 200 works of art, but also grew exhausted from the lifestyle and was drinking in excess. He sought refuge in the rural surroundings of the Southern France community of Arles.

While in Arles, he produced several portraits of Madame Ginoux, who was the proprietor of a Café he frequented and would also become his landlady when he rented an abandoned property known as ‘The Yellow House’ which he would use as a studio and residence.

The turbulent life of Van Gogh is often cited as a perfect example of the struggling, unrecognized genius, shunned in his own lifetime, only to be heralded after his death.

More than once the life of Van Gogh has been dramatized in film. Most recently in 2018, in which Appleton, Wisconsin native, Willem Dafoe stars as Van Gogh in the film ‘At Eternity’s Gate’, the trailer for which appears below: