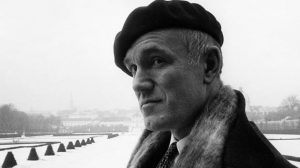 It was on 20 March, 1915, that pianist Sviatoslav Richter was born in the Ukraine. He would become an honored Soviet and Russian artist, dying in 1997 after an illustrious career.

Richter would perform his first concert at the Engineers Club of Odessa, in 1949. He then sought out instruction from the famous piano teacher, Heinrich Neuhaus, who would later praise his student by saying that he taught him “almost nothing”.

After winning the Stalin Prize in 1949, Richter began an extensive tour of the Soviet Union, Eastern Europe and China. In 1960 he toured the United States, and received warm reviews from even the harshest critics. In 1961 however, he appeared in London, where critics were less enthusiastic and called his playing “provincial”.  In 1970 he played Japan, having traveled there by taking a train across the USSR and then a ship to Japan. He would return to Japan eight more times, performing the works of Beethoven, Schumann, Mussorgsky, Prokofiev, Bartók and Rachmaninoff.

In 1986 he made a six month tour of Siberia, performing in some towns that had never heard a live performance of classical music. On performing in such areas, Richter said this – “Put a small piano in a truck and drive out on country roads; take time to discover new scenery; stop in a pretty place where there is a good church; unload the piano and tell the residents; give a concert; offer flowers to the people who have been so kind as to attend; leave again.”

He would perform in public as late as 1995, until  his health began to fail.