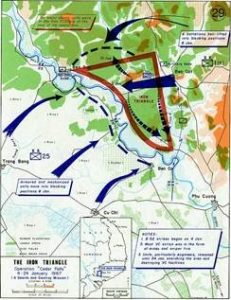 “Guerrillas are like birds”, said US Army General Earle Wheeler, “They’ve got to light somewhere and the place to get them is in their nests”. This was a reference to the enemy enclave known as ‘The Iron Triangle’ and to ‘Operation Cedar Falls’, which began 8 January, 1965, in South Vietnam.

It was the largest ground operation of the war up to that point, involving 30,000 US and South Vietnamese troops.

In what would be an ongoing theme of the war, its results were somewhat ambiguous and for every successful aspect, there was a corresponding negative. Initially, the results appeared to be positive with General William Westmoreland saying that it had been “very impressive in its results”. As time wore on however, more negative aspects to the operation began to be observed. The Viet Cong were indeed pushed out the ‘Triangle’, but a year later would not only return to it, but use it as a staging area from which they launched attacks in the 1968 Tet Offensive, which though militarily incomplete, scored a significant propaganda victory and shook the confidence of both the American public and US political institutions as it related to the prospects of a possible achievement of goals in S/E Asia.

By the same token, the mission, which had been held in strict secrecy, bred resentment and mistrust among some of the Officers of the Army of the Republic of Vietnam (ARVN), but at the same time had the positive effect of thoroughly surprising the Viet Cong and dealing a psychological blow to their morale. However, turning the coin over once again, coupled with the results of the follow up ‘Operation Junction City’, the weight of the American military appeared to be having an impact against the enemy and in particular in the latter operation, significant casualties were inflicted and material destroyed and intelligence collected.  It was the success of Cedar Falls in weakening the enemy that precipitated their failure to organize a general uprising in Saigon as part of the Tet Offensive and later, in captured VC documents, ‘Cedar Falls’ would be blamed for having taken a significant toll on their operations in this region.