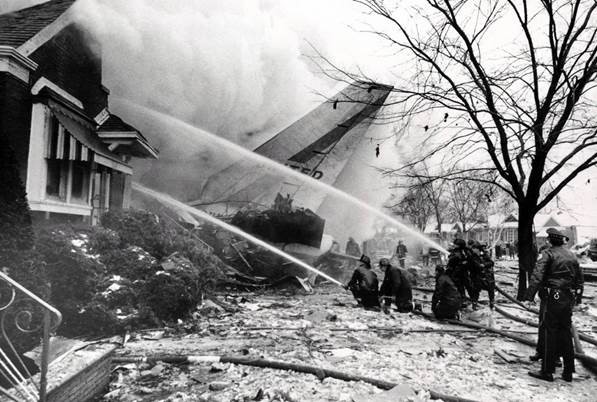 It was on 8 December, 1972, that the City of Chicago experienced one of its worst airlines disasters, which became even more notorious due to the unusual list of passengers who perished in the crash.

One was George Collins, an African American member of the US Congress. Collins had previously served as Alderman for the 24th Ward, having obtained that seat by replacing Ben Lewis, who was found handcuffed to a chair in his Ward Office having been shot three times in the head. Also on board was Michele Clark, a Gary, Indiana native who had been one of the first African American anchors on television and was working as a reporter for CBS News at the time of the disaster.

The passenger who caused the greatest interest on the part of the public however was Dorothy Hunt, wife of Watergate conspirator E. Howard Hunt. Hunt operated the command post in the Howard Johnson’s hotel across the street from the Watergate complex the night that the burglars broke into the Democratic National Committee Headquarters. Hunt and his wife had both been previously employed by the Central Intelligence Agency and each had served in overseas postings. Investigators discovered in the wreckage that Mrs. Hunt was carrying over $10,000 in cash. This was believed to be part of a ‘hush money’ payment arranged by Fred LaRue, a friend of former Attorney General John Mitchell who had been tasked with providing funds to mitigate the expenses of the Watergate conspirators and possibly, buy their silence.

The plane was descending from its Washington DC flight into Chicago’s Midway Airport when it crashed into a residential neighborhood on W. 70th Place. 43 passengers and crew members were killed, as were the two occupants of the residence. In the above photograph, you can faintly make out the ‘United’ airlines logo on the tail section of the aircraft as firefighters continue to work containing the blaze.