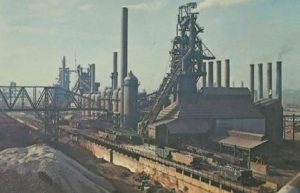 It was in October of 1977 that Epic Records would release a song by country singer Johnny Paycheck that would climb to number one on the Billboard charts. The song was “Take this job and shove it” and was a lament told from the point of view of a fed up factory worker.

Paycheck was a performer born in Ohio, who got his big break when he was hired by the band of Country music superstar, George Jones. Born Donald Eugene Lytle, he adopted the name “Johnny Paycheck” as a tribute to the working class aficionados of country music and it was a fun twist on ‘Johnny Cash’, a hugely successful performer in his own right, using his actual name.

The refrain “Take this job and shove it, I ain’t working here no more” was preceded by a recitation of irritations at the workplace, including descriptions of the Foreman as “a regular dog” and the Line Boss as “a fool”. It also implies troubles at home, “my woman done left and took all the reason I been working for” the boss is then warned, “you better not try to stand in my way, because I’ll be walking out the door”.

The song spent 18 weeks on the charts and was Paycheck’s only career number one hit.