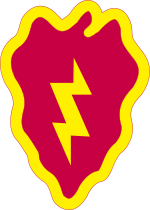 It was on 1 October, 1941, that the 25th Infantry Division of the United States Army would be activated. They wouldn’t have to wait long to see action, as the attack on Pearl Harbor was only a couple of months away. The unit would distinguish itself in multiple conflicts up to an including Operation Iraqi Freedom and Operation Enduring Freedom. It would be popularly known by its nickname ‘Tropic Lightening’, and its soldiers would proudly display a distinctive shoulder patch, seen above.

In Korea, the Division participated in the successful landing at Inchon and the recapturing of Kimpo Air Base, which were key to providing the momentum UN forces needed in routing North Korean and Chinese combatants who had temporarily gained the upper hand in the conflict.

The Division also distinguished itself in Vietnam. In 1963, the Division sent 100 helicopter door gunners to South Vietnam and before the war was over, the Division would engage in some of the war’s heaviest fighting, including Operation Attleboro, Operation Cedar Falls, Operation Junction City, as well as playing a key role in repelling Tet Offensive attacks against targets in Saigon. In the Vietnam war, 22 Medals of Honor were awarded to Tropic Lightning soldiers. Celebrated film director, Oliver Stone, served in the 25th Infantry Division during his service in Vietnam as did award winning country singer George Strait. Rap artist and Actor, Ice-T, joined the US Army after the conclusion of the Vietnam conflict and spent two years and two months on duty with the 25th Division.