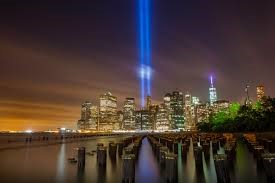 On 11 September, 2001, the United States suffered its most damaging terrorist attack to date. Over 3,000 lives were lost when four hijacked commercial airliners were flown against targets in New York City and Washington, DC. One of the planes was re-taken by passengers, preventing it from reaching its destination and was crashed in a field in Pennsylvania.

One of the more dramatic memorials to the tragic events of that day was staged using spotlights arranged so that the beams appear to be standing where the twin towers of the World Trade Center Building once stood. The memorial was first conducted in 2002, but then became an annual tribute.

The affect is created using 88 searchlights arranged in battery park and is known as the ‘Tribute in Light’. The lights are produced by an Italian company called ‘Space Cannon’ who sends a team every year to help with the installation. It takes a team of 30 technicians ten days to complete the installation.