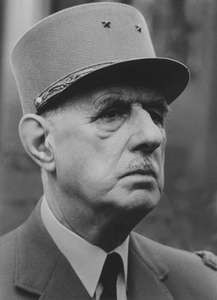 It was on 22 August, 1962, that a squad of assassins attempted to kill the President of France, Charles De Gaulle. The President was travelling from the Elysée Palace to Orly airport when his vehicle was raked by fire automatic weapons, which were wielded by ex-military Officers, opposed to De Gaulle’s favorable position regarding Algerian independence. Algeria, in North Africa, had been considered by some to actually be a part of France, rather than a colonial outpost.

It was determined that over 100 shots were fired that day with over a dozen hitting the vehicle and one landing within inches of the head of the President, but none of the vehicle occupants were hit. The would be assassins had missed the signal from their lookout and were not prepared as De Gaulle’s Citreon automobile sped by at 70 mph, leaving them to fire mostly at the back of the vehicle as it was already past them when they opened fire.

This ambush was later dramatized in the opening scene of the 1973 movie ‘Day of the Jackal’. De Gaulle was the target of other deadly plots as well, some only planned, but others attempted. Earlier that same year, De Gaulle narrowly escaped, again, via a Citreon DS 19 (reportedly De Gaulle’s favorite vehicle), when a roadside IED exploded on his route to his country house.