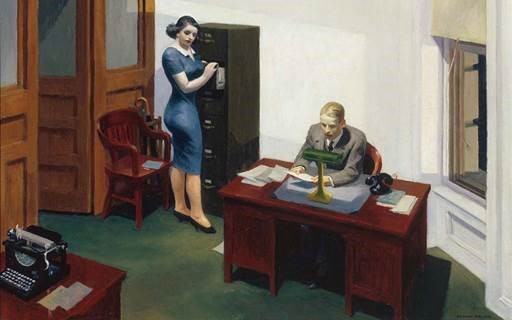 It was on 27 June, in 1949, that the American artist Edward Hopper, sold his painting ‘Office at Night’ (seen above) to the Walker Art Center in Minneapolis, Minnesota, for $1,500.

The painting depicts two persons, one male, one female, in a small office setting. Presumably, the man at the desk is likely the executive in the office and the woman at the filing cabinet is his assistant. She is probably the person who occupies the other desk with the typewriter on it. The composition of the piece contains a significant amount of suggestive imagery to stimulate the imagination of the viewer. The night setting alone is a bit unusual, leading the viewer to wonder why the two still occupy this space at this late hour. A breeze apparently blows through the open window, as is evidenced by the movement of the string from the shade, and, perhaps, is also responsible for the loose document we see on the floor. The woman peers downward. Has she noticed the document? Or is she gazing at her colleague, and is he studying the paper in his hands, or is he avoiding her? The office itself is also something of a character in the piece. It does not appear to be a prestige office, it is rather small and houses both the desks of the executive and the assistant. Is it the one man office of an accountant or an attorney? Then again, it could be an executive office within a larger firm. We don’t know.

Hopper himself said he was inspired to produce the painting after peering in the windows of rows of nondescript offices from his seat in a passing elevated train in New York City.