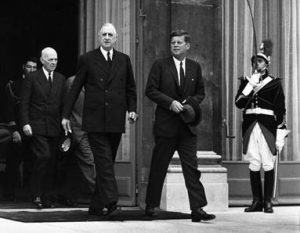 It was on 31 May, 1961, that President John F. Kennedy began his historic trip to France.

Despite the unpredictable and sometimes difficult relation between the USA and France, Kennedy was effusive in his praise for his host, President Charles de Gaulle, calling him “A Captain in the field in defense of the West” and French, “the language of Free Men”.

The President’s wife, Jaqueline, herself of French extraction and fluent in the language, made a particularly big splash with the public and press to the point that the President remarked to the media that he viewed himself as “the man who accompanied Jaqueline Kennedy to Paris”. Despite experiencing attitudes among the French bureaucrats that frustrated the First Lady, she did make one important breakthrough. Jackie developed a positive relationship with Cultural Minister Andre Malraux. Mrs. Kennedy inquired of him if the famous ‘Mona Lisa’ painting might be brought to the USA and Malraux agreed. Over the years, the painting had experienced theft, vandalism and forgery, and even the American director of the National Gallery of Art was hesitant to become the temporary caretaker of the priceless object. It arrived, however, in the summer of 1963 and over half a million visitors would come to see it before it was returned to France, unscathed.

Below is a clip of Kennedy accepting the welcome of Charles De Gaulle.