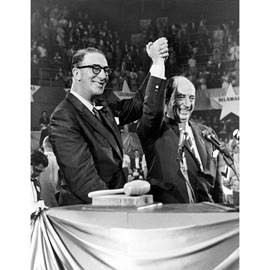 It is widely assumed that the debate between John F. Kennedy and Richard Nixon in 1960 was the first televised Presidential debate, and while that is true in regard to the two nominees of the opposing parties debating each other, it was actually preceded by four years, when Governor  Adlai Stevenson of Illinois and Senator Estes Kefauver of Tennessee debated one another on television in the race for the Democratic Nomination for President in that year.

The debate was moderated by journalist Quincy Howe, who would go on to moderate the fourth in the series of Kennedy/Nixon debates in 1960. When he opened the debate in 1956, he described himself to the television audience as “intensely nervous”. When he called on Senator Kefauver to provide his opening statement, he did so by telling the audience, “If any of you are wondering what he is going to talk about, the answer is about three minutes”, thus reminding the candidate of the time constraints. For his part Kefauver stated, “Candidates are only important as the ideas they represent”. In his closing statement, Governor Stevenson said the Eisenhower Administration was “a single interest government that is staffed at the top of policy making by people representing only one interest, call it big business, call it big money, call it big industry, call it what you please. Government should represent the interest of all people. This government does not.”

Stevenson would become the Democratic nominee, Kefauver, was selected as his Vice Presidential running mate.