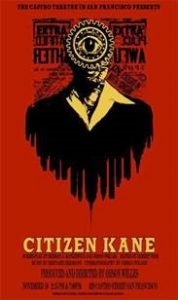 It was on 1 May, 1941, that the film ‘CITIZEN KANE’ had its premiere. The film was directed by Kenosha, Wisconsin native, Orson Welles, and would prove to be his most celebrated work in what was to be a long career.

The film concerns the rise of a young upstart newspaper publisher, who along the way dabbles in politics, business, and has more than one unsuccessful romance. He makes loyal friends and acquires bitter enemies.

The film was nominated for 9 Academy Awards. For decades, the film has been rated the best of all time by various sources.

The character of Kane was inspired by such newspaper and business titans of the era as William Randolph Hearst, Joseph Pulitzer, and Harold McCormick.

Welles himself had never directed a film before and utilized a handbook that had been compiled for him by a studio production manager. Welles lack of familiarity with conventional film led him to allowing the cinematographer to experiment in ways that traditional studio guidelines would have forbidden. Once when questioned where Welles got the confidence to apply such radical techniques he simply replied, “Ignorance”.  Upon its release, the New York Daily News called it “one of the most interesting and technically superior films that has ever come out of a Hollywood studio”.

The film was honored by the United States Postal Service in 2003, when it was included in a  series of U.S. postage stamps, marking the 75th anniversary of the Academy of Motion Picture Arts and Sciences.

In the following clip there is a somewhat ironic twist to one of the characters, saying to the character of Kane, “You’re a college boy, aren’t you?” and Kane gleefully disputing the inquiry. The real Orson Welles never attained a degree, and made ‘Citizen Kane’ at the age of 26.