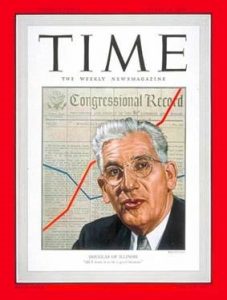 During WWII, Douglas joined the US Marines at the age of 50, making him the oldest Private in the Corps. He petitioned to go overseas, but having been told he was too old, he remained stateside for a time, writing training manuals and giving inspirational lectures to the troops.  Douglas eventually managed to use the influence of the Secretary of the Navy, along with Aldai Stevenson, to gain an overseas posting. On the second battle of Pelilu, Douglas received a Bronze Star for braving enemy fire in order to deliver ammunition. He also earned two purple hearts, one for wounds from shrapnel and another when he was shot through the arm while uncovering the cave of Japanese soldiers on the island. Douglas returned fire, killing the enemy.

After Douglas left the service, he returned to teach at the University of Chicago. In 1947 he was awarded the highest honor in the economics profession when he was elected president of the American Economic Association. Douglas later found himself at odds with the faculty at Chicago, stating, “. . . I was disconcerted to find that the economic and political conservatives had acquired almost complete dominance over my department and taught that market decisions were always right and profit values the supreme ones. . . If I stayed, it would be in an unfriendly environment.”

In 1948 Douglas entered the race for US Senate from Illinois. He traveled the State in a Jeep, campaigning for Civil Rights, increased housing programs, and the repeal of Taft-Hartley. He won his first term with 55% of the vote.

Douglas was also a passionate crusader for civil rights. Dr. Martin Luther King, Jr. described him as “the greatest of all the Senators”. At the opening of the session of the US Senate in 1957, he was the only Senator to defy custom and vote against the confirmation of segregationist Senator and fellow Democrat, James O. Eastland, as the chairman of the Judiciary Committee.

Defeated for election to a third term in 1966, he shortly thereafter retired from public life. He died in 1976. The visitors center at the Marine Corps training base at Parris Island is named in his honor.