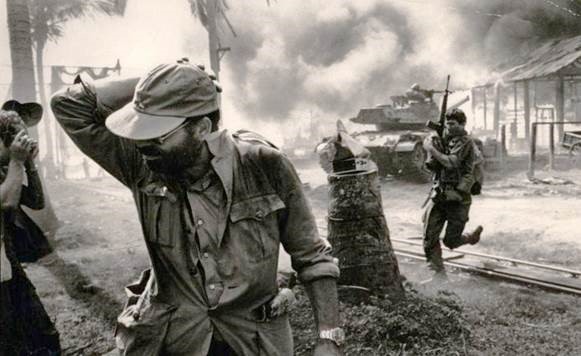 1 March marks the day in 1976 that director Francis Ford Coppola would arrive in Manila, The Philippines, to begin filming ‘Apocalypse Now’, a Vietnam War film about a US Army Captain assigned a secret mission to locate and terminate a rogue Colonel in the Special Forces. The film would not be released until 1979.

The problems that plagued the production included a typhoon which destroyed the set, the theft of the payroll, and a lead actor who had a heart attack. It wasn’t long until the production was 6 weeks behind schedule and $2 million over budget, and the problems weren’t over yet. Coppola (pictured above in the beard and ball cap) would later summarize the situation by saying, “We were in the jungle, there were too many of us, we had access to too much money, too much equipment, and little by little we went insane”.

Several versions of the film would be created with different endings, different closing credit scenes and other adjustments, some minor, others significant, with entire scenes and characters being removed.

The production of the film became the subject of a documentary ‘Hearts of Darkness: A Filmmaker’s Apocalypse’, which was released in 1991. In 2001, Coppola would release ‘Apocalypse Now Redux’ which contained a restored 49 minutes that was cut from the version most often show upon its initial theatrical release.

Noted critic Roger Ebert wrote, “Longer or shorter, redux or not, Apocalypse Now is one of the central events of my life as a filmgoer.”