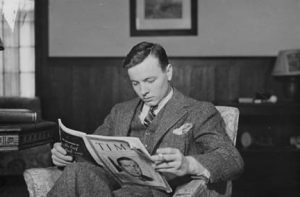 It was on 16 March, 1936 that Lewis Gorin (pictured above), a student at Princeton, published the manifesto of a satirical group called ‘Veterans of Future Wars’, playing off of the VFW acronym of the Veterans of Foreign Wars.

The group reasoned that as war in the next 30 years was inevitable, they were all due to be paid a bonus in 1965, but since most would be killed and unable to collect the bonus, it should be paid immediately. A Women’s Auxiliary of the group demanded trips to Europe at government expense, to view the future graves of their unborn sons.

The group received both scorn and praise from both the Left and Right of the political spectrum. Some on the Left thought it was an attack on the ‘Bonus Marchers’, those WWI Veterans who marched on Washington, DC to demand an immediate payment of bonuses not due for ten years. Others on the Left praised the stunt as pacifist theater that ridiculed war itself. Some on the Right thought it an appropriate lampoon of the New Deal programs that they viewed as wasteful giveaways, while others denounced the students as Communist agitators and cowards.

The group grew and disappeared quickly. More than 500 chapters were formed on college campuses coast-to-coast, but within a year the prank had run its course and was mostly forgotten. Mr. Gorin did prove prophetic in his prediction of another war however. With the exception of one student classified as 4-F, Mr. Gorin and all the original founding members of the group went on to serve in WWII. Mr. Gorin would return from his service and write a book about the history of the field artillery, in which he served, in that conflict.