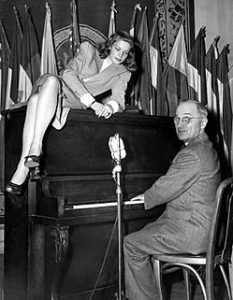 It was 10 February, 1945, that a quick thinking Press Agent for Warner Brothers Studios managed to create a historical photo op (see above).

Vice President Harry Truman stopped by the National Press Club in Washington, DC to say a few words and then sat down at a piano to plink out a few tunes in order to entertain some visiting servicemen.

Also in the room was aspiring 21 year old actress, Lauren Bacall, whose Press Agent perched her atop the piano just as VP Truman began his number. The VP, although surprised, didn’t seem to mind, and the photo, to use a current phrase, ‘went viral’.

Truman was likely later gratified that Bacall became an ardent Democrat and was an outspoken campaigner on behalf of Truman’s hand picked candidate for the Presidency in 1952, Governor Adlai Stevenson of Illinois.