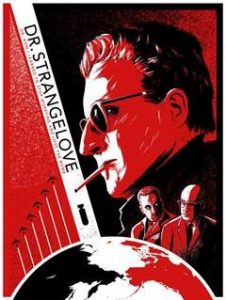 It was on 29 January, 1964, that the film “Dr. Strangelove” was released to the movie going public. The full title of the film is: “Dr. Strangelove, or, how I learned to stop worrying and love the bomb”. The film was directed by Stanley Kubrick, and is ranked by critics as one of the most brilliant political satires of all time.

The plot of the film concerns a paranoid US Air Force General, who manipulates a contingency plan to order an attack by bombers loaded with nuclear weapons on the USSR. The film then focuses on the attempts by the United States to undo the General’s catastrophic deed.

Action in the film switches between the Pentagon ‘War Room’ in Washington, DC, the cockpit of one of the bombers bound for the USSR, and the base at which the mad General, who ordered the attack, is holed up.

Many of the characters bear a resemblance to real individuals (although in an exaggerated form) of the political and military establishment of the time. Both the General who launches the attack, and the one assigned by the President to prevent it, are similar to General Curtis LeMay, who alarmed the American public with his seemingly careless attitude toward civilian losses and casual references to the possible tactical use of nuclear weapons. The rather ineffectual President is reported to have been based, at least in part, on Illinois Governor Adlai Stevenson, and Peter Sellers, who played the role, adopted a Midwestern accent when executing the part.

Sellers also played the role of the title character, ‘Dr. Strangelove’, who is a civilian advisor to the President and speaks with a thick German accent and inadvertently makes several references to the Third Reich, for which he clumsily begs the President’s pardon, including more than once referring to the Chief Executive as, ‘Mein Fuhrer’. This role was no doubt based upon the fact, that the US had spirited numerous Nazi scientists out of Germany at the conclusion of the Second World War in what became known as ‘Operation Paperclip’. These scientists became the backbone of the US rocketry/space program.

The film lampoons the policies and attitudes of the original Cold War Era. At one point, the President of the United States and the Soviet General Secretary argue as to who is the most sorry that the world is about to be destroyed. In another scene, an officer has discovered the code that will recall the bombers, but doesn’t have the required coins to make a pay phone call to the Pentagon ,because a US Army Colonel hesitates to shoot the lock off a Coca-Cola vending machine, which in his view is a destruction of private property.

In 1989, the United States Library of Congress included “Dr. Strangelove” in the first group of films selected for preservation in the National Film Registry.