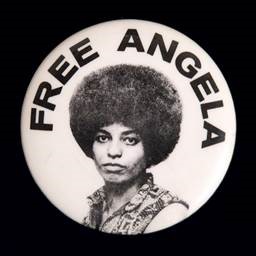 It was on 26 January, in 1944, that African American scholar Angela Davis was born in Birmingham, Alabama. She was raised in a politically active environment and her mother was an organizer of  ‘Southern Negro Youth Congress’.

After a youth spent in segregated schools, and in activity of the Girl Scouts, Davis was awarded a scholarship to Brandeis University in Waltham, Massachusetts, where she was one of three Black students in her freshman class.

In 1963, she attended the eighth World Festival of Youth and Students in Helsinki, Finland. Upon her return, she was confronted by the FBI, who wished to interview her about the event and who she met there.

She studied abroad in both France and Germany. While in Germany, she visited East Berlin, and concluded that the GDR was making more progress in shedding the Fascist legacy of the Third Reich than was the FRG in the West.

Davis earned her master’s degree from UC-San Diego. She then earned her doctorate in philosophy from the Humboldt University in East Berlin. Beginning in 1969, Davis was an acting assistant professor in the philosophy department at the University of California, Los Angeles (UCLA).

On August 7, 1970 Jonathan Jackson took over a courtroom in Marin County, California, by force with the intention of freeing his incarcerated brother. Jackson took a Judge, a prosecutor, and three members of a Jury as hostages. While attempting to flee the courthouse with the hostages, police engaged Jackson in a shootout. The Judge and Jackson were both killed in the melee, and one of the Jurors and the Prosecutor were injured. Records showed that the firearms, used in the attack, had been purchased by Davis, but she maintained that she had purchased them, so her own security guards could protect her from numerous death threats she had received after the public controversy over her position at UCLA. She said that the firearms had been taken without her knowledge and that she was unaware of the Courthouse plot, ill-conceived by Jackson.

Committees in over 200 US communities and in nearly 70 foreign countries were organized to demand the release of Davis, who appeared at the Marin County Superior Court saying, “I now declare publicly before the court, before the people of this country, that I am innocent of all charge,s which have been leveled against me by the state of California.” Buttons and posters featuring Davis’ image and demanding her freedom became a familiar sight on college campuses.

On June 4, 1972, after three days of deliberations, an all-white jury returned a verdict of not guilty. Her writings remain in wide use in classes regarding feminism and race.