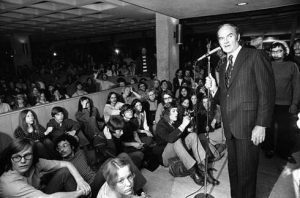 On 18 January, 1972, US Senator George McGovern (D-SD), announced his candidacy for the Presidency of the United States. Prior to his election to the US Senate, McGovern had served in the US House of Representatives and Directed President Kennedy’s ‘Food for Peace’ program. A veteran of WWII, McGovern flew 35 missions against Nazi Germany in a B-24 Liberator.

A vocal critic of American involvement in Vietnam, McGovern won the Democratic nomination, but lost every state in the general election to Richard Nixon, with the exception of Massachusetts and DC.

McGovern carried 6 counties in the State of Wisconsin, including Dane. He is seen in the above photo at campaign appearance on the UW-Madison campus.