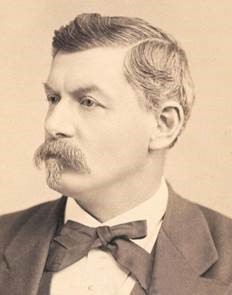 It was on 15 January, in 1878, that George B. McClellan was sworn in as the 24th Governor of New Jersey. McClellan had risen to fame during the Civil War, but remained a controversial figure all his life.

McClellan was born in Philadelphia and graduated from the United States Military Academy at West Point in 1846, finishing second in his class. McClellan performed reconnaissance missions during the Mexican War and became a protégé of General Winfield Scott.

In peacetime, McClellan burnished his reputation as an accomplished commander of a Company of Army Engineers and also utilized his mastery of French to translate important military manuals. He was an official US Army observer during the Crimean War in 1855 and witnessed the Siege of Sevastopol.

Upon the opening of the Civil War, McClellan was tasked by Lincoln with the Defense of Washington, DC and in this McClellan demonstrated his organizational genius. As time went on, however, both politicians and public became frustrated with McClellan’s defensive posture and demanded aggressive action against the Rebels and McClellan was frequently criticized for what was seen as an over estimation of the enemy strength and his unwillingness to engage, unless he could be guaranteed the advantage of superior forces. Lincoln continued for some time to defend McClellan’s usefulness in logistics and training of the vast Army of the Potomac, commenting, “If he can’t fight himself, he excels in making others ready to fight.” When McClellan failed to pursue the retreating Rebel army after their defeat at the Battle of Antietam, Lincoln removed him from command in 1862.

McClellan was a staunch Democrat and was nominated by that Party to oppose Lincoln in the election of 1864. It was an uneasy fit, as many northern Democrats were for bringing the war to quick termination and teamed McClellan with a running mate who called for an immediate negotiated peace, even though McClellan was for continuing the war. There was some support to nominate him again in 1868, but it did not come to fruition.

In 1877, he was elected Governor of New Jersey and served a single term that was regarded as successful. He remained active in Democratic Party politics, actively supporting the campaign of Grover Cleveland for President.

McClellan died suddenly at the age of 58 in 1885. His son George McClellan, Jr., was elected to Congress, as well as Mayor of New York City.

A statue of Major General McClellan stands at Connecticut Avenue in Washington, DC. Upon its dedication General Dwight remarked, “Statues may crumble to dust. Veterans’ graves will be obliterated by time, but the grandest monument of the service of valor of the soldiers and sailors of the Civil War, the United States of America, the hope and joy of the world, consecrated to liberty by the blood and treasure of the nation, the undying testimonial of the patriotism of her people, will continue years and years.”