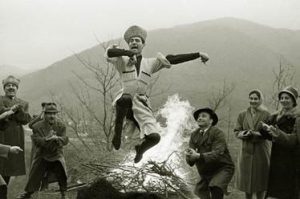 It was on 7 January, in 2000, that Makhmud Esambayev died. He had been one of the most famous dancers in the USSR.

Born in Chechnya in 1924, as a child his father would take him to local wedding celebrations where he would perform dances for the celebrants. By the age of 15, he had joined his first professional dance company. He mastered dances from around the world and would be awarded with the ‘Peoples Artist’ honor in 1974 and received the ‘Hero of Socialist Labor’ medal in 1984.

In addition to his dancing, Makhmud was elected to the Supreme Soviet, where he stood out among the crowd of delegates, wearing his traditional tall papakha hat, which he refused to remove, even for a head of state. It is said that Soviet leader Leonid Brezhnev was known to survey the crowd prior to meetings of the Supreme Soviet, notice Makmud’s hat, and say affectionately, “Makhmud is here, time to start the meeting.”

Below is a short video clip of Makhmud performing a traditional dance and clad in his distinctive headgear.