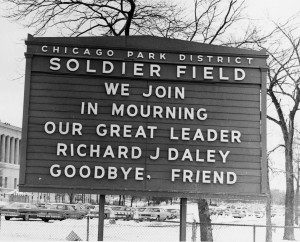 On 20 December, 1976, Mayor Richard J. Daley of Chicago died. The Mayor began the day as he always did, attending Mass at Our Lady of the Nativity. He then attended a breakfast with his Department Heads, followed by a tour of ice sculptures in Civic Center Plaza, a venue later to be renamed in his own honor. After a visit to a park district, he complained of chest pains and was taken to the office of his doctor on Michigan Avenue. After an examination, his physician said that he would need to be admitted to the hospital right away. The Mayor called his wife and then collapsed. At 74 years of age, and serving his 6th term in office, Mayor Richard J. Daley was dead. In the following days, an estimated 100,000 of his fellow citizens would pass by his casket in mourning. In 1981, a bronze statue of Daley was dedicated in the State Capitol building in Springfield, Illinois.

Daley was the key organizer of Democratic Party apparatus first begun under Mayor Anton Cermak. This organization, known as ‘The Machine’, became legendary for its effectiveness, although it had begun to decline by the time of Daley’s death.

It primarily consisted of an army of city employees, who owed their jobs to the prevailing political structure and, in turn, acted as a potent political force in elections. Citizens, loyal to the machine, had their local needs attended to, while those who did not back the approved list of candidates and projects were summarily ignored and frozen out of government.

As Mayor, Daley’s power was legendary. Local residents referred to him as ‘The Boss’ and City employees dubbed him ‘The Man on 5’, referring to his office on the 5th floor. When his aides were once asked how to approach the Mayor, they simply replied,  “on tiptoe”.

Mayor Daley’s long tenure made him synonymous with the city itself, and his death had a dramatic impact on the city residents, particularly those who had built their careers during his administration. Ray Simon, Corporation Counsel for the city from 1965-69 said, “When the Mayor died, it was like the end of the world. It was like having your own father die.”