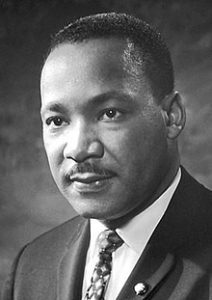 It was on 10 December, 1964, that Martin Luther King, Jr. accepted the Nobel Peace Prize, at a ceremony in Oslo, Norway.

In his acceptance speech, King, who had been jailed and beaten numerous times in demonstrations across the US for Civil Rights, stated, “I accept the Nobel Prize for Peace at a moment when 22 million Negroes of the United States of America are engaged in a creative battle to end the long night of racial injustice. I accept this award on behalf of a civil rights movement which is moving with determination and a majestic scorn for risk and danger to establish a reign of freedom and a rule of justice.”

King, a married father of four, would die in 1968, killed by an Assassin, while he was visiting Memphis, Tennessee. He was in the city to support striking sanitation workers who were members of the AFSCME Labor Union.