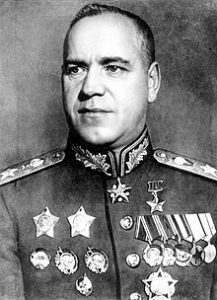 1 December marks the birth of Georgi Zhukov, in 1896. Zhukov was a famed Marshal who led the Soviet armies to victory after victory in World War II.

Zhukov was born into poverty in Kaluga Oblast in Western Russia. He traveled to Moscow as a youth to begin work as an apprentice furrier, experiencing the hardships and cruelty of a life of a young working man.

During the First World War he was conscripted into a Calvary Regiment and was awarded for his bravery and his natural fighting ability. After the 1917 revolution, he joined the Bolsheviks and fought in the Civil War, again winning decorations for his skill in combat.

In 1938, he commanded forces in Mongolia in a border dispute battle against the Japanese, and here successfully tested new tactics of mechanized mobile warfare. He would later use similar techniques against the Germans on the Eastern Front.

Zhukov was present for the surrender of the Third Reich in Berlin and became the first commander of the Soviet Occupation Zone in Germany. In this role, Zhukov requested the Soviet Government to urgently transport to Berlin tons of grain, potatoes, and other foodstuffs in order to feed the devastated population. He issued strict orders that his subordinates were to “Hate Nazism but respect the German people”.

Zhukov was popular among other Allied commanders, particularly Eisenhower, with whom he developed a long standing personal friendship.

Zhukov is one of the most recognized and honored heroes of the Soviet side of WWII. A large statue of him, on horseback, stands near the entrance of the Kremlin in Moscow.

His memoirs are available to University Staff who may access them at the Memorial Library by using their WiscID card.