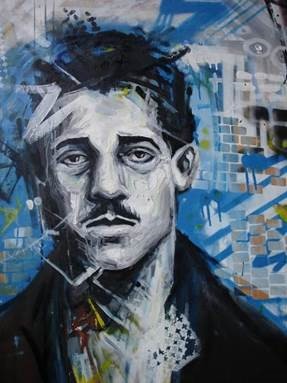 25 July, marks the birthday of Gavrilo Princip in 1894. Princip was a Serbian nationalist who sought to liberate Slavs from their Austro-Hungarian occupiers and carried out the assassination of Archduke Franz Ferdinand of Austria and his wife, Sophie, in Sarajevo on 28 June 1914.

Princip was from a poor family of farmers who lived off the land. At the age of 13, he made his way to Sarajevo in order to attend school, working as a laborer in a forest, hauling felled trees to the mills in town, as he tried to earn money for his education. In 1912, Princip was expelled from school for being involved in a demonstration against Austro-Hungarian authorities.

In June of 1914, Franz Ferdinand made a visit to Sarajevo to oversee military training. As his motorcade made it’s way though the streets it took a wrong turn, when the driver attempted to reverse the vehicle the engine stalled. Realizing his chance, Princip stepped toward the stationary car and fired at a distance of just under 5 feet, killing the Archduke and his wife. Princip would die in prison in April, 1918.

Princip has been the honoree in a number of plaque’s, memorial busts, and other tributes in Serbia. Some of these, including Princip’s home/museum were destroyed in the 1990’s during the war in the Balkans. In 1930, a plaque was erected on a wall above the spot where Princip stood when carrying out the assassination. When Yugoslavia was overrun by forces of the Third Reich, military reporter and German Army Lieutenant Kurt Mittelmann took the plaque as a war trophy and personally presented it to Adolf Hitler, an ethnic Austrian, on his 52nd birthday. The plaque was again installed in 1945 after the war.

In 2014, on the 100th anniversary of the assassination, President of Serbia Tomislav Nikolić, dedicated a new statue of Princip in the city of East Sarajevo saying, “Princip was a hero, a symbol of liberation ideas, tyrant-murderer, idea-holder of liberation from slavery, which spanned through Europe”. Princip’s image (shown above) often appears in street art, graffiti and murals in south central Europe, particularly in regions where Serbs are an ethnic minority.