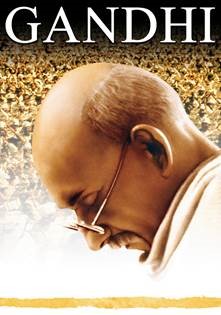 It was on this day, 10 May, in 1981 that film director Richard Attenbourgh completed work on his masterpiece, GANDHI. A film about the life of the independence activist had been a dream project for Attenbourgh for many years.

Director Attenbourgh began his odyssey of creating a dramatization of the life and work of Gandhi in 1962. He was able to secure an audience with Indian Prime Minster and Gandhi colleague, Jawaharlal Nehru, as well as Nehru’s daughter Indira, who subsequently promised cooperation on the project. Nehru’s death in 1964 was but the first of many setbacks that plagued the enterprise.

In 1976, it looked as if the project might once again be able to get underway, until a state of emergency in India was declared, making on-location shooting impossible. By 1980 however, both the funds and the locations had been secured to start production and shooting began on 26 November of that year.

Over 300,000 extras were used in the funeral scene, the most for any film according to Guinness World Records. A clip of that scene appears below…