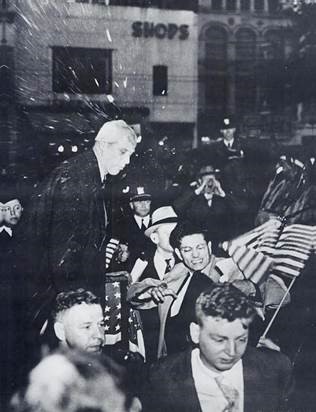 On 4 June, 1938, a mob of over 200 people attack Norman Thomas at a Socialist rally in Jersey City, as a fusillade of eggs struck the speaker, this photo was snapped and appeared in newspapers across this country.

He also spoke across the country on a variety of issues, from pacifism to birth control. Thomas was one of the few public figures to oppose President Franklin Roosevelt’s internment of Japanese Americans following the attack on Pearl Harbor. Thomas accused the ACLU of “dereliction of duty” when the organization supported the internment.