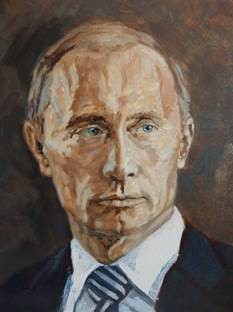 It was on 7 May, in 2000, that Vladimir Putin first took office for a full term as President of Russia.

Putin was born in Leningrad, Russia, in 1952. His mother was a factory worker and his father was in the Soviet Navy. His paternal grandfather had served as a cook to both Lenin and Stalin. Putin described his father as a “dedicated Communist and militant Atheist”, his mother by contrast was an Orthodox Christian who had Vladimir baptized and gave him a gold cross to wear around his neck, which he continues to do to this day. Putin is often observed celebrating religious holidays and taking part in a traditional ice water bath during the celebration of the Orthodox Epiphany in January. Several members of Putin’s immediate and extended family were lost during WWII.

Putin had something of a rambunctious childhood, but one man and one movie put him onto his path in life. The man was a judo instructor in his school. Putin credits his instructor with providing the discipline and focus he needed as a young man. Putin became a black belt and even wrote a book on the sport. He remains an enthusiast and occasionally attends matches. The film that influenced him was ‘Seventeen Moments of Spring’, about a Soviet spy that infiltrates his highest echelons of the Nazi government. The film made him want to pursue intelligence work.

After Law School, Putin began a 16-year career with the Committee for State Security. A fluent German speaker, he was assigned to a post in Dresden, in what was then the German Democratic Republic. After Putin left Intelligence work, he took a job under the Mayor of Leningrad in May of 1990, beginning his career in public policy. Beginning in 1991, Putin held minor positions in the government of Boris Yeltsin. In 1999, Putin was appointed one of three Deputy Prime Ministers; it was at this time people began to speculate that he was in position as a possible future President of Russia. By the end of the year, Yeltsin resigned, and Putin became acting President until the next election could be held.

The Russian economy, and the nation’s standing in the world, were both suffering from the shock of transitioning from the socialist to the capitalist world through most of the 90’s. Putin’s Presidency began a period of growth economically, gaining 7% a year. In addition, swift action was taken to address a lingering and destructive separatist rebellion in the Russian region of Chechnya and a Georgian challenge to Russian nationalism in Ossetia. Putin’s organization of Russia into seven Federal Administrative Districts, to which each has an appointed Presidential Envoy, was widely viewed as having brought stability. By 2007, his United Russia Party, won 64% of the vote, ushering in a large parliamentary majority. That same year, Putin himself posted an approval rating among Russians of 81%. Putin led efforts to win the bid for the location of the Olympic Games in Sochi as well as the World Cup of Soccer in Moscow.

Since taking office, Putin has participated in an annual multi-hour live television marathon in which he takes calls and email questions from citizens as well as questions from journalists and a studio audience. This has produced questions on everything from international diplomacy to the whether or not a husband should allow his wife to get a dog as a pet. Putin advised the husband to purchase a pooch.