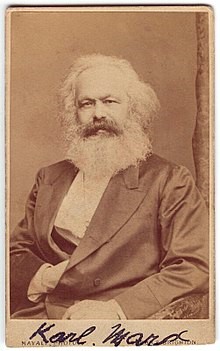 It was 200 years ago, on 5 May, 1818, that philosopher Karl Marx was born in Trier, Germany. His 1848 pamphlet, ‘The Communist Manifesto’ and his three volume magnum opus, ‘ Das Kapital’, are still widely read today and are the basic texts of socialist and revolutionary movements around the world.

Karl was the third of nine children, born to Heinrich Marx and Henriette Pressburg. While his family was not religious, Marx was ethnically Jewish. His father Heinrich studied the words of Voltaire and Kant and agitated for liberal reforms.

Karl befriended Ludwig Von Westphalen, a liberal aristocrat to whom he dedicated his doctoral thesis. He courted, and married, Westphalen’s daughter, Jenny, at a Protestant church in 1843. That same year Marx moved to Paris, where he took up the editorship of a radical leftist paper. A year later he would meet and begin a life long friendship with Friedrich Engels who had recently authored, ‘The Condition of the Working Class in England’ in which he argued that the working class of industrialized nations would be the instrument of revolution.

Marx moved to London in 1849 and would remain there the rest of his life, being buried in Highgate Cemetery upon his death in 1883. He headquartered ‘The Communist League’ there as well. Marx and his family lived in dire poverty, surviving mostly on charity provided by Engels and revolutionary minded admirers of means. To supplement his income Marx began contributing journalistic submissions to newspapers, including ‘The New York Daily Tribune’, which included numerous articles about the American Civil War.

Upon his death, Friedrich Engels said, “His real mission in life was to contribute, in one way or another, to the overthrow of capitalist society and of the state institutions which it had brought into being, to contribute to the liberation of the modern proletariat, which he was the first to make conscious of its own position and its needs, conscious of the conditions of its emancipation. Fighting was his element. And he fought with a passion, a tenacity and a success such as few could rival”. He concluded Marx’s eulogy by saying, “He died beloved, revered and mourned by millions of revolutionary fellow-workers — from the mines of Siberia to California, in all parts of Europe and America — and I make bold to say that though he may have had many opponents he had hardly one personal enemy. His name will endure through the ages, and so also will his work!”

In 2017, Raoul Peck directed the film, ‘The Young Karl Marx, a trailer for which appears below.