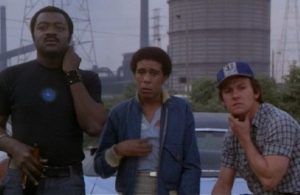 It was on 10 February, in 1978, that the film, ‘Blue Collar’, was released to American theaters. The film starred Yaphet Kotto, Richard Pryor and Harvey Keitel (pictured above) as workers in a Detroit auto plant. The film shows the workers as they battle both plant and Union politics along with their own home and financial hardships. It was released with the tagline, “The American Dream.” If you’re rich, you can buy it, if you’re anything else, you have to fight for it!”

The film was hailed by critics and continues to enjoy a strong reputation. The Chicago Tribune film critic Gene Siskel named it as one of the best films of 1978. Director Spike Lee included the film on his ‘Essential Films All Aspiring Filmmakers Must See’. In his autobiography, Bruce Springsteen named ‘Blue Collar’ as one of his favorite films from the 1970s.

The film was shot on location at an auto plant in Kalamazoo, Michigan and at locales around Detroit, including the Ford River Rouge Complex on the city’s southwest side.