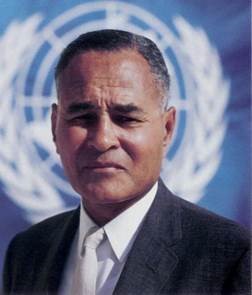 He was the first African American to gain a PhD in political science from an American university. Ralph Bunche conducted postdoctoral research in anthropology at the London School of Economics (LSE), and later at the University of Cape Town in South Africa.

During World War II, Bunche worked in the Office of Strategic Services (OSS), as a senior social analyst on Colonial Affairs. In 1943, he was transferred to the State Department. He participated in the preliminary planning for the United Nations at the San Francisco Conference of 1945. He was an adviser to the U.S. delegation for the “Charter Conference” of the United Nations held in 1945, when the governing document was drafted. Together with First Lady Eleanor Roosevelt, Bunche was considered instrumental in the creation and adoption of the Universal Declaration of Human Rights.

In 1950, he became the first African-American to receive the Nobel Peace Prize. Bunche died in 1971, at the age of 68. Upon his death, President Richard Nixon stated, “America is deeply proud of this distinguished son and profoundly saddened by his death. But we are also strengthened by the inexhaustible measure of dedication and creative action that spans his splendid career.”