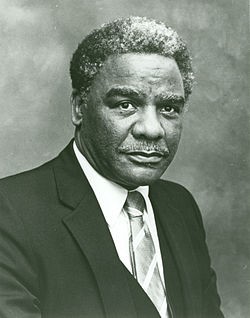 Harold Washington was born 15 April, 1922 and would go on to serve as Chicago’s first, and so far only, African-American Mayor.

Growing up in the ‘Bronzeville’ neighborhood of the city, Washington attended DuSable High School and worked as a meat packer. Washington served in the US Army during WWII and helped to construct Army Air Corps runways in the South Pacific. At Northwestern Law School, Washington was the only African-American student in his class.

After serving in both the Illinois House and Senate, Washington was elected to the US Congress and then won a three way Democratic Party primary for Mayor in 1983, in which he defeated both the incumbent Mayor Jane Byrne and the son of the late Mayor Richard J. Daley. He would win the general election and would win re-election in 1987.

A reform Mayor who struggled to tear down what he viewed as intuitional racism and improve the image of the city, he would often say to audiences – “It used to be if you said you were from Chicago, people would say – ‘Chicago? Bang! Bang!’ Now they say – (at which point the audience would respond with a resounding) – “HOW’S HAROLD?”

Washington died in the Office of the Mayor of a massive heart attack.  Thousands of Chicagoans attended his wake in the lobby of City Hall between November 27 and November 29, 1987. The inscription on his tombstone was simple enough, it read: ‘He Loved Chicago’.

Below is a brief video tribute to the Mayor….