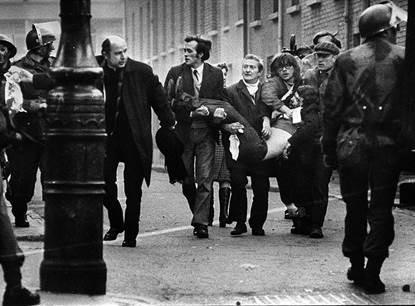 It was on 30 January, 1972, that British soldiers fired into the participants of a protest, billed as a ‘Catholic Civil Rights’ march in Derry, Northern Ireland. Those shot dead by soldiers of the 1st Battalion, Parachute Regiment, ranged in age from 17 to 59. Marchers, local residents, and British and Irish journalists present, maintain that soldiers fired into an unarmed crowd, or were aiming at fleeing people and those tending the wounded, whereas the soldiers themselves were not fired upon. No British soldiers was wounded by gunfire or reported any injuries, nor were any bullets or nail bombs recovered that would support claims that the soldiers were reacting to threats to their lives. One paratrooper, who gave evidence at the tribunal, testified that they were told by an officer to expect a gunfight and “We want some kills.”

While marchers were aware of the presence of British soldiers, they didn’t react immediately when shots were fired, thinking they may have been plastic bullets, frequently used to disperse crowds. Then Irish activist, Bernadette Devlin shouted through a bullhorn to the crowed – “get down, they’re using live rounds!” 13 would be killed at the scene, another died a few months later, and another 14 were shot and wounded. Three days of rioting followed, costing another 21 lives.

Lieutenant Colonel Derek Wilford who was directly in charge of 1st Battalion Parachute Regiment, was awarded the Order of the British Empire by Queen Elizabeth II.

In 2002 a film, titled, ‘Bloody Sunday’ was made to dramatize the events of the day, below is a trailer for that film.