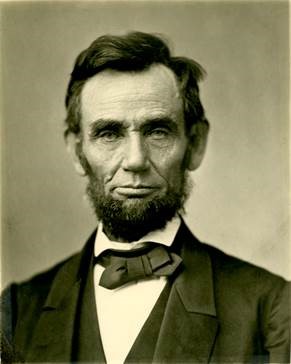 It was on 6 November, 1860, that Abraham Lincoln was elected President of the United States. Lincoln, a native of Kentucky, began his political career in Illinois, where he served 8 years in the State Legislature. He served one term in Congress and then returned to Illinois to practice law. The State of Illinois would later brand itself, “Land of Lincoln”. After the collapse of the Whig Party, he joined the new Republican Party, and was the Republican nominee for US Senate in 1858.

Lincoln’s election in 1860 prompted 7 Southern States to form the Confederacy, seceding from the Union. With all attempts at reconciliation failing, the Confederates fired upon Ft. Sumter in South Carolina and the American Civil War, the bloodiest conflict in our history, got underway. Lincoln would be re-elected in 1864, and see the war to a successful conclusion, only to be assassinated by John Wilkes Booth, in April, 1865.

Lincoln’s Gettysburg Address, a 272 word speech that took only three minutes to deliver, has become one of the most enduring speeches in all American history.

From Mount Rushmore in South Dakota, the Lincoln Memorial in Washington, DC, to the statue on the grounds of our Bascom Hill, monuments, memorials and tributes to Lincoln are common across the land. Lincoln has been portrayed many times on film, the most recent of which was the 2012, film, ‘LINCOLN’, in which actor Daniel Day Lewis plays the title role. A trailer for the film appears below…..