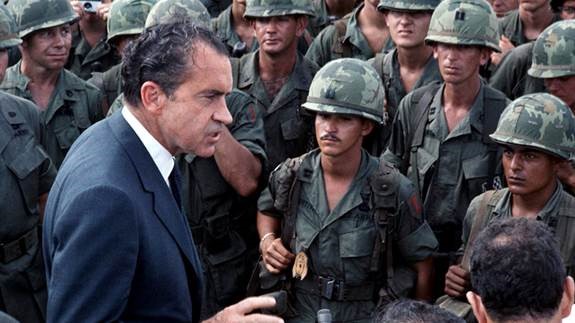 11 November is observed as ‘VETERANS DAY’ in the United States. In the above photo, Richard Nixon (a former US Navy officer) greets officers and men of the US Army 1st Infantry Division on duty in Vietnam. Veterans Day takes place on the anniversary of the end of the First World War. In that conflict, the war powers came to an agreement to end hostilities at the 11th hour on the 11th day of the 11th month. The First Infantry Division was known as ‘The Big Red One’, due to their unique insignia patch, clearly visible on the Captain facing Nixon. These soldiers also wear the M-1 type helmet, known affectionately as the ‘steel pot’. The helmet was in service from 1941 until the 1980’s. It was well liked by servicemen as it consisted of two parts, an inner plastic liner and the steel shell on the outside. When separated, the outer shell could be used as a wash basin, cook pot, or entrenching tool, among other things. It’s distinctive profile became an iconic symbol of the American fighting man.