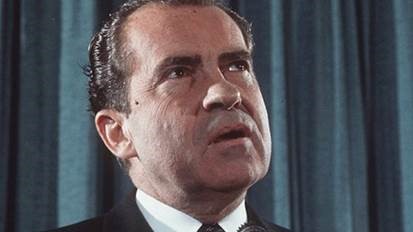 It was on 3 November, 1969, that Richard Nixon gave one of the most significant speeches of his Presidency. It read in part –

“And so tonight-to you, the great silent majority of my fellow Americans-I ask for your support. I pledged in my campaign for the Presidency to end the war in a way that we could win the peace. I have initiated a plan of action which will enable me to keep that pledge. The more support I can have from the American people, the sooner that pledge can be redeemed; for the more divided we are at home, the less likely, the enemy is to negotiate at Paris. Let us be united for peace. Let us also be united against defeat. Because let us understand: North Vietnam cannot defeat or humiliate the United States. Only Americans can do that.”

Although the phrase is known to have been used as far back as the Administration of President Coolidge, and had been uttered by AFL-CIO President George Meany in 1967 as well as Vice-President Spiro Agnew in May of ’69, it was the Nixon speech that had the effect of placing the term ‘silent majority’ into the common lexicon of American politics. Many Americans identified with the tag as an apt description setting them apart from the noisy public protests against the American involvement in Vietnam. After the speech, the White House was flooded with telegrams of support. The phrase ‘silent majority’ has since often been employed by politicians seeking to galvanize support.