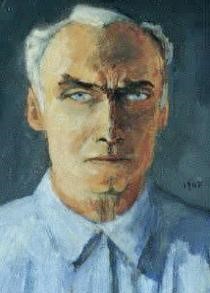 It was on 27 October, 1877, that American artist Walt Kuhn (seen above in self-portrait) was born into a working class neighborhood in Brooklyn, NY. His experiences in this rough and tumble waterfront environment would shape his perspective.

Before appearing on the serious art scene, Kuhn found steady work as an illustrator and cartoonist. In 1909, Kuhn had his first solo exhibition in New York. In 1925, Kuhn became an instructor at the Art Students League of New York. In addition to his artistic talents, Kuhn was particularly skilled at promotion and was a key organizer of the 1913 Armory Show, the success of which was unprecedented in the art world.

A reoccurring theme of Kuhn’s were circus performers, with one critic noting that Kuhn painted his subjects faces “with startling frankness”. The solitary models, seated and without the pomp and fanfare of the circus big top, often take on a sullen appearance in Kuhn’s work. Seen clad in their garish costumes appearing a bit ridiculous and pitiable,  some of Kuhn’s models noted that he would first spend up to 20 minutes applying make up to them before he began painting. They had the sensation that he was painting their faces in the same manner that he would later paint the canvas with their portraits.

Kuhn became increasingly frustrated that his work was difficult for critics to pin down, seen as laying somewhere between European modernists and the American Regionalists or social-realists. His painting, ‘Clown with Drum’, can be viewed at the Art Institute in Chicago. 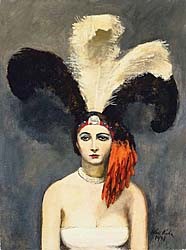