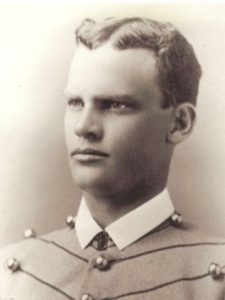 6 October marks the birthday of John Y.F. Blake. Blake was born in Missouri, raised on the cattle ranches of Texas, and graduated from the US Military Academy at West Point in 1880. He was assigned to the 6th Calvary in Arizona and was later a Scout in New Mexico. He found military life monotonous and cut his Army career short.

Considering himself an enemy of the British Empire wherever it planted its flag, Blake agreed to take command of a Corps of Irish volunteers, in South Africa, which was raised to fight on the side of the Boers. He described the task as easy when, “in command of true and patriotic Irishmen, overjoyed and brimming full of enthusiasm at the prospect of giving a blow to Ireland’s life-long enemy and oppressor.”

Blake found himself horseback once again, engaging in the unconventional warfare tactics of the Boers against the British. He was wounded in action and returned to America where he published a book, ‘A West Pointer with the Boers’.

In the book he describes his disgust at the English exploitation of both the Black Africans and the non-English white settlers. In reference to the subjugation of the Black African tribes of Rhodesia he notes, “….they hoisted the British flag on top of a tree to wave in peace and love over the many hundred women and children whom they murdered in the name of humanity.” In describing the conditions in which native Africans were forced to work in the Mines of Cecil Rhodes, he notes that their lives “were worse than hell itself, and thereupon, they rebelled, and killed every white man they could lay hands on. I said, ‘Well done’.” Blake dedicated the book to the ‘Memory of the 22,000 Boer women and children murdered in the English prison camps of South Africa’.

The book is available at University Libraries on campus, which University Staff may access for free, by use of their WiscID card.