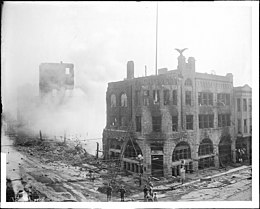 On 1 October, 1910, the City of Los Angeles was rocked by a powerful explosion. When the smoke cleared, 21 persons were found dead in the wreckage of the building that housed the daily newspaper, ’The Los Angeles Times’.

The bomb was the work of two brothers, James and John McNamara. They were members of the Iron Workers Union. The Los Angeles Times for 20 years had been a key mouthpiece for the Merchants and Manufactures Association and earned a reputation as vehemently anti-Union, supporting every tactic, regardless of how draconian, to stymie organizing efforts. This included when the Los Angeles City Council passed a local ordinance banning picketing or “speaking in public streets in a loud or unusual tone” which resulted in the arrest of nearly 500 Union members who were subjected to stiff fines.

In response, the Iron Workers membership elevated Militants Frank Ryan to the Office of President and John McNamara as Secretary Treasurer. What followed was one of the most extensive bombing campaigns in US history, between 1906 and 1911, the Union set off 110 bombs at industries that resisted organizing.

After months of unsuccessful investigations and no arrests, and an additional bomb resulting in $25,000 worth of damage to Llewellyn Iron Works, the private detective agency of notorious Union buster William J. Burns was engaged by the Mayor of Los Angeles. Burns riddled the Union with spies, and his tactic soon bore fruit and lead to the arrest of Union Secretary John McNamara and his brother James.

Upon their conviction, Socialist Party leader Eugene V. Debs had this to say ,”It is easy enough for a gentleman of education and refinement to sit at his typewriter and point out the crimes of the workers. But let him be one of them himself, reared in hard poverty, denied education, thrown into the brute struggle for existence from childhood, oppressed, exploited, forced to strike, clubbed by the police, jailed while his family is evicted, and his wife and children are hungry, and he will hesitate to condemn these as criminals who fight against the crimes of which they are the victims of such savage methods as have been forced upon them by their masters.”