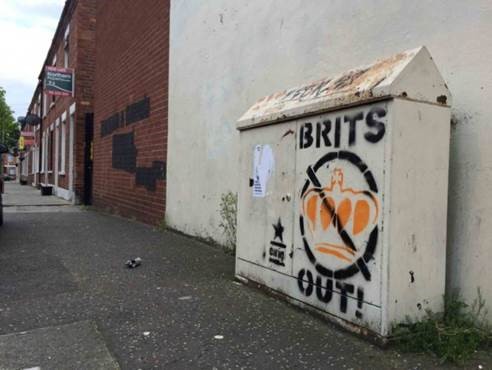 It was on 14 August, 1969, that the British Army commenced ‘Operation Banner’, and began what would be their longest deployment, which would not conclude for 38 years. The deployment was prompted by protests and the response to them, in various cities of Northern Ireland. In the summer of 1969, Catholic residents protested what they believed to be sectarian discrimination in everything, from housing to jobs. These protests were met with force by the overwhelming Protestant police force, the Royal Ulster Constabulary, as well as organized Protestant paramilitary organizations. The stated aim of Operation Banner was to restore peace, but the image and nature of the mission soon took on the appearance of a full blown occupation.

Although statistics vary somewhat, the British Army is considered responsible for over 300 deaths during the campaign, more than half of whom were civilians and of those, 61 of whom were children. In the course of the deployment, 4 British soldiers were charged with murder, none of them served greater than a 3 year sentence and all returned to regular army service.

The Irish Republican Army (IRA) began a guerrilla campaign of resistance, which remained active from 1970 to 1997, when ceasefires and peace negotiations began in earnest.  Throughout this period, the British Army was regularly accused of colluding with a variety of Protestant paramilitary groups. This ranged from providing such armed groups with intelligence files to off duty soldiers actively taking part in assassinations.

During the deployment there were significant flare ups and flash points. One of these was the Ballymurphy massacre in 1971, in which 11 civilians were killed. This took place during the period of ‘internment’ in which the British swept suspected IRA areas and imprisoned hundreds of people without trial. In 1972 the actions of the Army again met with world wide condemnation, when soldiers of the 1st Battalion Parachute Regiment shot 26 unarmed protestors and bystanders at a civil rights march in the city of Derry, an event an inquiry would later call, ‘unjustifiable’. The British Army presence began to wind down with the 1998 Good Friday Agreement, whereupon security was officially transferred to the police and 5,000 British troops remained for ‘training purposes’ only. ‘Operation Banner’ came to an official close on 41 July, 2007.

The island of Ireland to this day remains divided between the 26 counties that constitute the Irish Republic and the 6 Counties that make up ‘Northern Ireland’, which remains part of the United Kingdom. This partition dates back to the peace agreement, concluding the 1921 war for Irish independence. Governance responsibilities are now divided between a Northern Ireland Assembly and the UK government in London. Unlike their Unionist rivals, members of the Nationalist political parties, such as Sinn Fein, who are elected to the lower house of the UK Parliament seats according to the territory, refuse to take their seats so as not to swear an oath to the Queen as is required. The provincial government, the Northern Ireland Assembly, is split three ways, currently with 40 members from Unionist parties, 39 members from Nationalist parties, and 11 from others.