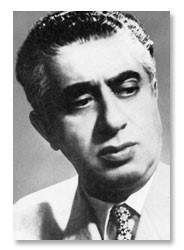 1 May marks the death of composer Aram Khachaturian in 1978. In his early years Khachaturian wrote, “I grew up in an atmosphere rich in folk music: popular festivities, rites, joyous and sad events in the life of the people always accompanied by music, the vivid tunes of Armenian, Azerbaijani and Georgian songs and dances performed by folk bards and musicians — such were the impressions that became deeply engraved on my memory, that determined my musical thinking.”

In 1921, the eighteen-year-old Khachaturian arrived in Moscow and enrolled at the Gnessin Musical Institute in 1922, simultaneously studying biology at the Moscow University. In 1925, Mikhail Gnesin started a composition class at the institute, which Khachaturian joined. In 1929, Khachaturian entered the Moscow Conservatory. His Armenian-influenced First Symphony, which Khachaturian composed as a graduation work from the Moscow Conservatory in 1935, was admired by Dimitri Shostakovich. Khachaturian held important posts at the Composers’ Union, becoming deputy chairman of the Moscow branch in 1937. He subsequently served as the Deputy Chairman of the Organizing Committee (Orgkom) of the Union between 1939 and 1948.

In 1950, Khachaturian began conducting and started teaching composition. He also began working on his third and last ballet, Spartacus (1950–54), which later proved to be his last internationally acclaimed work. He was named People’s Artist of the Soviet Union in 1954.

In his memoirs, Khachaturian reflected that, “the October Revolution fundamentally changed my whole life and, if I have really grown into a serious artist, then I am indebted only to the people and the Soviet Government. To this people is dedicated my entire conscious life, as is all my creative work.”

In 2013, UNESCO inscribed a collection of Khachaturian’s handwritten notes and film music in the Memory of the World Register.